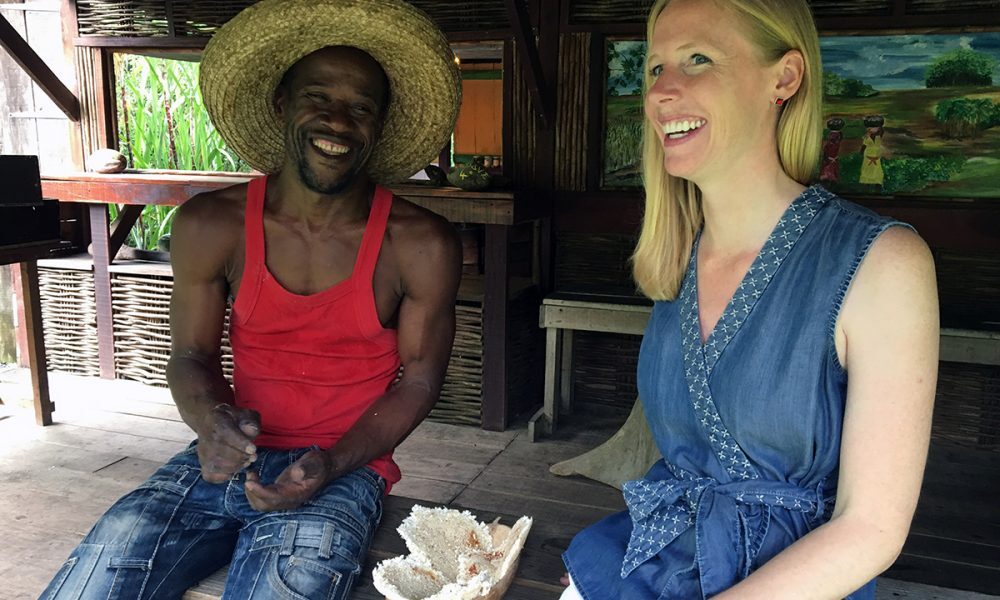 We are honored and excited that “Travels with Darley Martinique” is a finalist in the Golden Mic category for Best Broadcast Feature for the Caribbean Travel Media Awards, which celebrate the very best in US and Caribbean travel journalism!

Background on “Travels with Darley: Martinique” : We discovered Martinique through the eyes of local people and covered the diversity of experiences, history, cuisine and culture, including the top places to sun, sail, snorkel, eat, drink and take a deeper dive into eco-friendly nature and fascinating Creole culture.

On a walk through the Emerald Estate, Domaine d’Emeraude, which cultivates tropical flora and fauna, many of which has traditional cultural significance, viewers can learn about plants and medicinal herbs that are important in Creole culture. On an eco-friendly boat tour, a local guide shares information about precious mangroves and the island paradise of Ilet Chevalier. An early morning fishing expedition on a black sand beach in Le Carbet, shows viewers how a traditional technique, called Coup de Senne, is still used to catch the freshest fish that may end up on your breakfast plate.

In Fort-de-France, we discover more than just the Grande Marche. With the help of locals, we share the story of one of Martinique’s most famous resident’s, Aimé Césaire. A poet, author and politician, Aimé Césaire has been called the most influential Francophile Caribbean writer of his generation. He helped found Negritude, a movement that sought to restore the cultural identity of black Africans. He also served as mayor of Martinique and remains a beloved icon of Martinican residents.

Also in Fort-de-France, we learn about Empress Josephine, the first wife of Napoleon. Josephine helped to convince Napoleon to reinstate slavery in all the French colonies when France regained control of its colonies from the British and may have done so to help bolster her family’s plantation in Martinique, where 200 slaves worked in the mid-18th century. Island residents today have a complicated relationship with Josephine and viewers learn why from local residents at La Savane and at La Pagerie Museum.

A further look at the island’s past with slavery takes us to a recreated 19th century slave village, the Schoelcher Library and the Slave Memorial, located in a dramatic setting on Martinique’s Southern coast across from Diamond Rock. Artist Laurent Valère created a memorial here to recognize the slaves who perished during an April 1830 shipwreck that took the lives of more than 40 African slaves.

We also celebrate the tradition of Carnival with the Clay Men Group at the Pottery Village in Trois Ilets and Vaka Band’s Carnival rehearsal, which has some fun outtakes in our “behind the scenes.” Our filming in Martinique wouldn’t be complete without rum tasting, which we were able to sample throughout this Caribbean island. It’s through the people we met and were able to film to share Martinique’s rich stories that we find the true essence of Martinique! We’re excited to share these stories with you and now spread the word through the Caribbean Tourism Organization’s Awards.

Watch the full Martinique PBS episodes now on Amazon Prime and your local PBS TV station. Check out our Martinique trip itinerary to follow in our footsteps in Martinique.