If curling up with a good book sounds like a great holiday escape, keep reading to learn about Gladstone’s Library in Wales. Thousands of books, quiet study spaces, boutique bedrooms and long walks in the castle grounds: for a unique retreat into the countryside, Gladstone’s Library is a hidden gem. It is the only residential library in Britain, and its only Prime Ministerial library too, inspiring the tradition of Presidential libraries in the US. There are 250,000 printed items on our shelves, including 8,000 of the Grand Old Man’s own books which form the core of our collection. Many of these books contain Gladstone’s scribbled annotations, which are in the process of being digitalized. There is also an impressive theology collection, and many more books on literature and history. 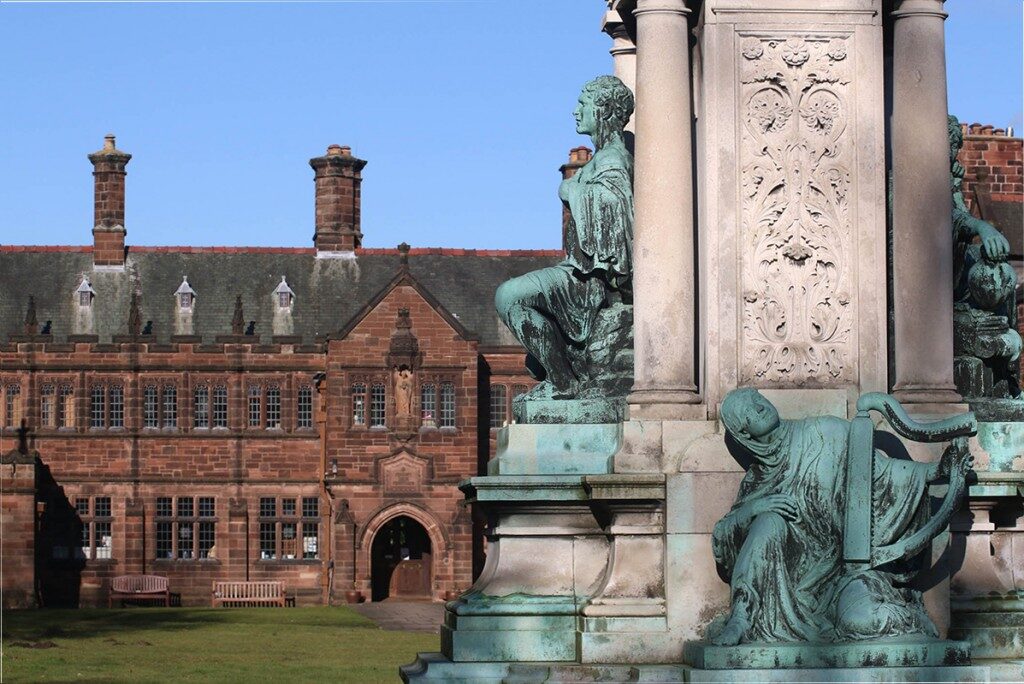 Those who come to stay can nestle in one of 26 cozy boutique bedrooms, gaze out on the grounds from the window, and sit at their writing desk and think in peace. The bistro, Food for Thought, serves delicious food every day at reasonable prices. History of Gladstone’s Library The Library began its life as the ‘Tin Tabernacle’, a corrugated metal structure on what is now the parking lot, as a place for an aging Gladstone to put his vast collection of books for others to read.

According to legend, when he was well into his eighties, he tied his books up with string and pushed them up the hill from his estate in a wheelbarrow! He chose the village of Hawarden as he believed that London, Cambridge and the like had more than enough libraries, and it would be more fitting to establish a place of study and learning further north. Hawarden was ideal as it also had, and still has, excellent links to the major cities of Liverpool and Manchester. According to his daughter Mary, Gladstone wanted to bring together ‘books that had no readers with readers who had no books’, hence its rural location and the array of scholarships and bursaries that continue to enable people to stay here today.

The Library as it stands today was built in 1898, as a memorial to Gladstone after his death. Gladstone himself was one of Britain’s most eminent politicians. He was our longest serving Prime Minister, holding the office four times, and was Chancellor of the Exchequer four times, delivering 13 Budgets. His rivalry with fellow politician Benjamin Disraeli is legendary. He was an ardent supporter of Irish Home Rule and fought passionately for international human rights, coining the term ‘crimes against humanity’ in the wake of the atrocities committed by the Ottoman Empire in Bulgaria in the 1870s. He famously said that he would always back ‘the masses against the classes’, and one of his many nicknames was ‘the people’s William’ for his efforts to improve the conditions of working people. Gladstone’s love for books led him to support the public libraries movement of the nineteenth century, and we continue to honor his memory by adding to the Library’s collection in his key areas of interest. According to his diaries, which are kept here, Gladstone read over 20,000 books during his lifetime, averaging out at about a book per day!

This passion for reading and ideas remains alive and well at Gladstone’s Library, which attracts a wide range of people from all over the world, from priests and bishops to writers, as well as students from the nearby universities and pupils from the local high school. It is an oasis in a busy world.

Places to let your mind wander. The Reading Rooms are a silent study space with only a few computers tucked away in a separate room and televisions banished from the bedrooms in favor of good old-fashioned radios. This makes it the best place for a writing retreat, to get a project done, or just to escape modern life for a little while. The fact that it is set deeply in the countryside adds to the feeling that you’re living in seclusion – however, if you want to explore, it’s easy to find your way to somewhere for a day trip. Hawarden is a pretty little village in North Wales, close to the walled Roman city of Chester (‘Caer’ in Welsh, which means ‘fortress’!) and a train ride from Liverpool, Manchester, Birmingham and London. If you’re staying here and fancy a trip, the ‘Iron Ring’ of medieval castles built by Edward I around North Wales – including those at nearby Conwy, Rhuddlan and Flint – are inspiring and imposing at the same time. Take a bus into Chester and wander round the unique Rows, timbered galleries forming a second row of shops over the main streets.

The Victorian seaside towns along the coast are also interesting for a visit, including Llandudno, which has a fantastic contemporary art scene and Britain’s only cable-pulled tram system, which will take you up the picturesque (but very windy!) Great Orme. For more ideas, guests can peruse dozens of leaflets on display and ask the staff for advice and tips. In the evenings, as the night draws in and we pull across the curtains, you can curl up with a cup of tea (or something stronger!) in the Gladstone Room, a common room well-equipped with comfy sofas, a roaring fire in winter and an honesty bar. Swap writing tips or book recommendations with the other guests, take part in lively discussions late into the night, or simply settle with a book from the contemporary literature collection on the bookshelves. 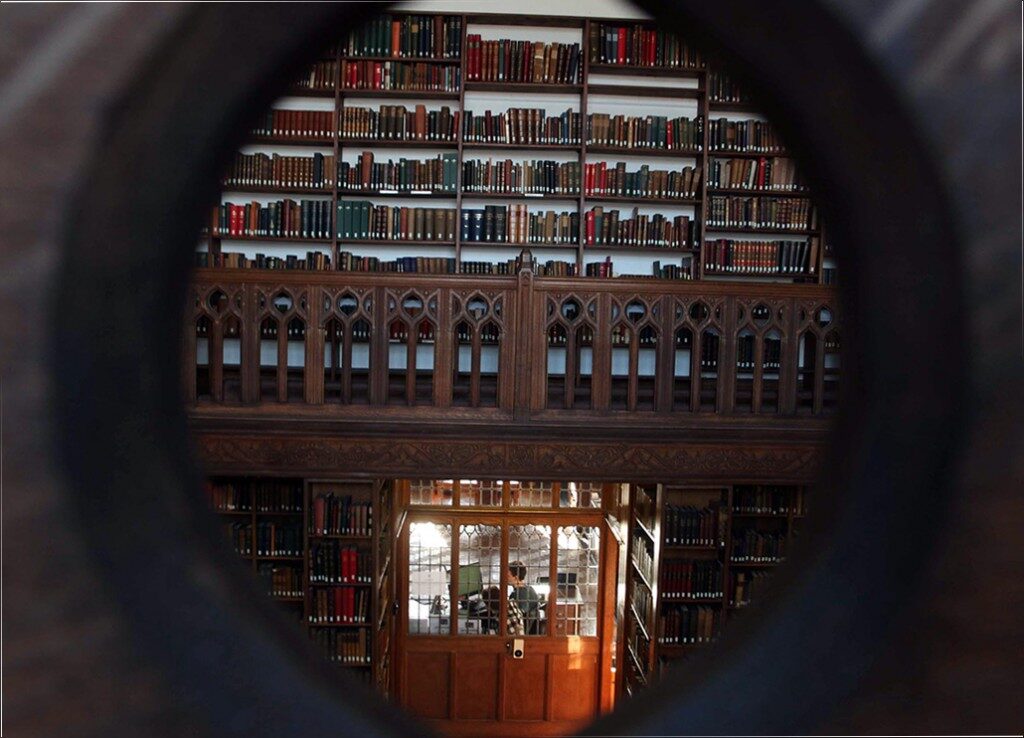 Gladstone’s Library boasts more than 250,000 books, journals and pamphlets on a wide range of subjects.

As well as providing an unusual place off the beaten track for a vacation, the Library is a haven of ideas, discussion and debate. There are dozens of events throughout the year that attract visitors and speakers from all over the world. If you’re planning a winter retreat, consider arriving for Hearth on February 6-7th, where writers including Natasha Pulley (The Watchmaker of Filigree Street), Dan Richards (Holloway, The Beechwood Airship Interviews) and Rebecca Farmer (Not Really) will discuss their work beside the roaring fire. Our events in the coming year encompass topics such as Islam, sexuality, the relationship between art and faith, the afterlife in the popular imagination and Victorian bestsellers, as well as popular week-long courses in Greek, Hebrew, Latin and Welsh.

There is always something happening whenever you might decide to come and stay. There is just something indescribable in the air at this place. Not only does it look like an offshoot of Hogwarts (complete with a common room Gryffindor would be proud of), the mix of writers and booklovers of all descriptions means that people are always willing to stop for a chat or share a drink together in the evenings, making it a hub of quiet but convivial activity in which you never know who you might meet. It is the only place in Britain where you can sleep so closely to the books, and its location at the heart of a pretty Welsh village means that you’d have a different kind of story to tell back home. How you can go: Gladstone’s Library is located in the heart of Hawarden village, less than an hour’s drive from Manchester and Liverpool and also accessible by train.

Learn more about visiting at gladstoneslibrary.org.

Darley Newman is the founder, host and producer of Travels with Darley on PBS, Amazon Prime and Journy.
View All Posts

Warm Up With the Ultimate Hot Toddy recipe from West Virginia!