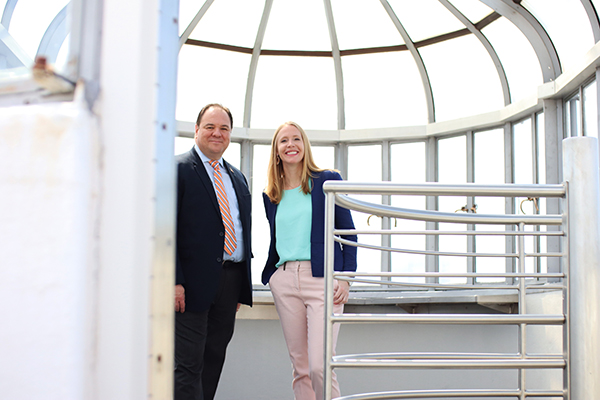 Darley’s all new series focused on architecture and history has launched two pilot half hours on PBS in the NYC area, the #1 TV market, on NJ PBS.  “Look Up with Darley” explores the stories behind buildings, parks and spaces that we pass everyday. It encourages us to “look up” from our devices to get curious about and appreciate our unique surroundings,  stunning architecture and lesser-known history. Darley’s kicked off this series with two half hour episodes focused on Newark, home to unique theaters, churches and historic neighborhoods.

Watch the “Look Up with Darley: Newark” episode on NJ PBS, including Part 1 and Part II.

Look Up Newark Part I (watch it online)

The series pilot was filmed in Newark, New Jersey, the largest city in the Garden State. Darley explores iconic buildings and neighborhoods uncovering Newark’s beauty and undiscovered history. Residents of New Jersey, Philadelphia and beyond can watch the pilot in primetime on New Jersey PBS.

From a hidden gem at Newark Airport to an Olmsted Park that dazzles, Darley enlists local historians and experts to share the intersection of history and culture through our built environment in New Jersey. She discovers our captivating surroundings often hidden in plain sight.

Viewers can go inside Audible Innovation Cathedral, an 80,000 square foot historic space retrofitted with contemporary offices amid a landmark status exterior that’s still intact. At Grace Church in downtown Newark, Darley hears the children’s choir sing “America the Beautiful,” a melody whose roots are in this historic church. Grace Church was designed in the 1840s by Richard Upjohn, who also designed Trinity Church on New York’s Wall Street. It is today a National Historic Landmark .

Liz Del Tufo guides Darley to Branch Brook Park, an Olmsted Park with the largest collection of cherry blossom trees in the USA and shares how this park came to be and why its so beloved by Forest Hill residents today.  Noelle Lorraine Williams, the Director of the African American History Program for the New Jersey Historical Commission, shares a lesser-known site outside of NJPAC and takes Darley to  The New Hope Baptist Church, where Whitney Houston grew up singing in the choir.

At an airport that millions pass through, Darley reveals a museum that’s open to the public inside an art deco masterpiece. She takes viewers inside of the the world’s first passenger terminals at Newark International Airport, where James Gill shares information about Amelia Earhart’s experiences there during the Golden Age of travel. In Newark’s Ironbound, Darley explores a history of immigration that’s spawned one of the best neighborhoods for foodies in New Jersey. Darley talks with  the “King of Meats,” Rodrigo Duarte at Caseiro E Bom and tries Spanish tapas at Casa de Paco on a food tour with Emily Manz of Have You Met Newark Tours.

Darley is no stranger to launching new series with “Look Up” being her third original broadcast series. She believes that “Look Up” is different than any other series out there, much like the unique concept for her long-running series, ”Equitrekking,” which went on to win multiple Daytime Emmy Awards, circle the globe on networks in over 85 nations, spawned a whole new genre of travel and vocabulary, and still broadcasts a decade and a half later!

Hosted by award-winning television personality and producer Darley Newman, this episode of Look Up with Darley continues its architectural tour of Newark, New Jersey’s most populated city, that began in the pilot’s premiere episode in June.  This time, Newman explores a striking cathedral, a sacred synagogue, a historic coffee shop, the library of a literary icon and more, digging deep into the history with those that know these places best. Watch a trailer.

“Look Up is intended to inspire people to, literally, look up from their devices and take a moment to appreciate their everyday surroundings in a new way,” said Newman. “With our busy lives, it’s so easy to pass by places, but when we take a moment to reflect and get curious, we find that the buildings, neighborhoods, parks ­– these places have fascinating and surprising backstories, and so much to tell us about who we are today.”

In Newark’s Penn Station, historian Dave Abeles takes Newman through the Golden Age of travel via the station’s remarkable Art Deco designs and shares its history as a transportation hub. Next, she joins Father Armand Mantia at the Cathedral Basilica of the Sacred Heart, revealing the story behind this massive cathedral. She also goes behind the scenes with historian Linda Forgosh to uncover Newark’s Jewish legacy at the Newark Museum of Art. She is also joined by expert Eric Freedman who showcases New Jersey’s oldest Holy Ark in the Ahavas Sholom synagogue, an edifice listed on the National Register of Historic Places.

Newark’s literary history takes center stage as Rosemary Steinbaum takes Newman inside The Philip Roth Personal Library at the Newark Public Library, a Beaux-Arts style building based on the 15th century Palazzo Strozzi in Florence, Italy. At the historic coffee shop, T.M. Ward Coffee Company, Newman meets entrepreneur Scott Sommer to learn how this small business, operating in Newark since 1869, has stood the test of time. Finally, Noelle Lorraine Williams and Mayor Ras J. Baraka shed light on Newark’s more recent history, stopping by the buildings that preserve the past while creating spaces for artistic expression and a brighter future.

Darley Newman is an award-winning TV host, writer, director and producer who has spent over a decade traveling and producing the successful Emmy Award-winning Equitrekking and Travels with Darley series on public television, Amazon Prime, Ovation TV and networks in over 85 nations. While leading production teams in over 30 countries and 26 states, she’s been charged by an elephant in Botswana’s Okavango Delta, gone free diving in South Korea, taken on the world’s highest commercial bungee in China and explored by mountain bike the WWI ‘red zone’ of northeast France.

Stay tuned for this unique series coming to a PBS station near you and streaming networks.

Season 10 of Travels with Darley coming to PBS and Streaming