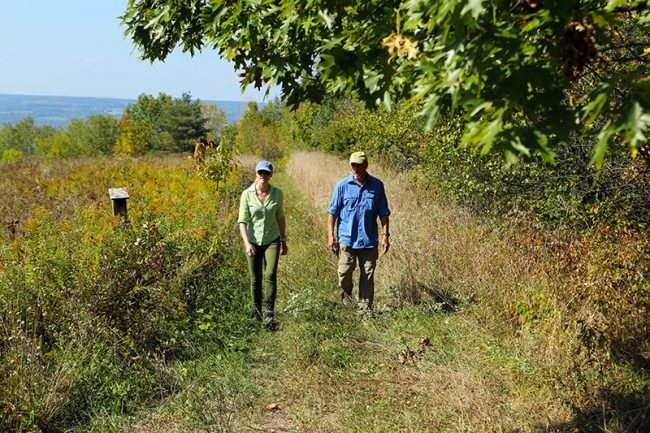 Hiking the Finger Lakes Trail The Finger Lakes National Forest is a hidden gem. The only national forest in New York State, there’s a lot to do inside the 16,212-acre forest, which is nestled between Seneca and Cayuga Lakes in the Southern Finger Lakes. We recommend combining outdoor adventure with wine tasting and craft brews at area vineyards and distilleries, as well as getting out on Seneca Lake from charming Watkins Glen to make for a great Finger Lakes vacation.

The below itinerary can be enjoyed over a weekend or a few days or stretched into a longer vacation by combining it with our Southern Finger Lakes Travel Itinerary.

From any point on the Finger Lakes Trail, one can travel east, west, north or south and walk all the way to North Dakota, Maine, Alabama, Georgia, and Ontario, Canada and touch at least some of the 19 states in the US and the Province of Ontario in Canada depending upon the path chosen. In the forest, we hiked the 12-mile Interloken Trail.

Other places to hike in the forest reveal Finger Lakes and U.S. history. The Finger Lakes Region was a hotbed for activity during the Women’s Suffrage Movement. Head over to Caywood Point to Camp Fossenvue to the “Queen’s Castle.” It’s here that Elizabeth Cady Stanton, Elizabeth Smith Miller and other figures of the early women’s rights movement would gather in the 1870’s. It was their retreat places to play sports and talk about the right to vote. The history is rich and well worth visiting. Take a break to visit an area vineyard, Atwater Estate Vineyards, a farm-winery where you can wine taste with views of Seneca Lake. Winemaker Vinny Aliperti introduced me to a Syrah with hints of pepper, cassis, and blackberry and a well-balanced Reisling.

This Southern portion of the Finger Lakes is home to a myriad of vineyards. The lakes provide a moderating influence that allows for the growth of tender European varieties. One of the most popular is Riesling, which has historically been the most predominant variety grown in the Finger Lakes. Rather try beer? Choose a stop along the Finger Lakes Beer Trail, like Steuben Brewing, for a pint.

There are a few options for places to stay. Those who wish to camp may wish to lay claim to the 3-sided Adirondack style shelter located along the Finger Lakes Trail. Blueberry Patch Campground is free for overnight use. Potomac Group Campground is for groups of 10 to 40 people, but you must hike to reach it. For horseback riders, Backbone Horse Campground has parking areas with hitching rails, a small corral, water for horses, vault toilets, and cooking grills. Just nearby, there are other options for hotels or inns, including the Watkins Glen Harbor Hotel located alongside the harbor in downtown Watkins Glen or Grist Iron Brewing, a cute inn with a brewery onsite, where we stayed. Enjoy dinner at Stonecat Café.

Start your morning on horseback with D & K Ranch, which welcomes riders to experience the Finger Lakes National Forest. Owner Kelly Terry works to rescue and rehabilitate horses at this small ranch. We trekked through Horton Pasture, a stunning trail that cuts across a meadow with some trees for shade along the ride and far off views of Seneca Lake.

The lands where the Finger Lakes National Forest rest today were inhabited by Native Americans for more than 10,000 years and would later be settled by farmers and loggers. Archaeological sites today abound in the forest and there are also living reminders of the past in the form of apple trees, which visitors are free to pick and eat while visiting the forest. Ask your riding guide where to find the best apples, some of which you may be able to pick from on horseback during your excursion.

Head to lunch at Grist Iron or into the town of Watkins Glen. Enjoy the harbor and a sunset sail on the Schooner True Love, a historic sailboat featured in the 1956 movie “High Society” with Bing Crosby, Grace Kelly and Frank Sinatra and the 1940 film “Philadelphia Story” with Cary Grant and Katherine Hepburn. You’ll be exploring the largest and deepest of the Finger lakes. Wine, cheese and snacks served on board make for a nice end to your day of exploration.

Why Belgian frites are so good?